CE1.3 The project aimed to design a smart lighting system. The proposed lighting system would be energy efficient and would perform autonomous operation. From some previous details, I found that it was tough to control energy wastage when a large group of lighting was used in a building. I reviewed the current smart lighting technologies available in the market along with their product features and advantages. I also researched for implementing the components in the smart lighting system design projects.

CE1.4 I studied Modular Intelligent Control System (MICS), different sensors and lighting control technology to understand and then execute the project successfully. I observed that embedded system was among the fast growing technology in modern times. It was used in home appliances, industrial automation, aeronautics, and automobiles. It uses a controller or PC for the execution of a specified task and embedded C or assembly language programming was used for programming.

CE1.6 I started my work by collecting the details from the analysis of the concerned literature. I found that smart system was an autonomous operation and detected the environment changes with the help of sensors. In order to reach the optimal result, the system performed in a continuous manner. I visited university’s library and read newspapers for latest articles and journals. I also scrolled internet to get more details on the topic. 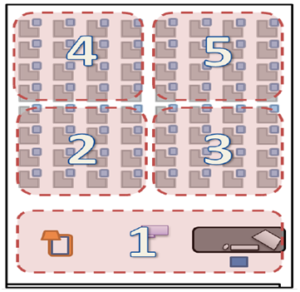 CE1.8 In case 1, I observed that whenever the exhibition hall was unoccupied, the lightings in the exhibition hall were still turned ON. In the case 2 of the example, when a small group number of student occupied the class, all the lights in zone 1 to zone 4 were still turned ON. Lastly, in case 3, exhibition was having hard time whenever they switched their teaching mode. This was because dissimilar teaching mode needs different lighting environment.

CE1.10 I used microcontroller, crystal oscillator, power supply, transformer, regulator, light dependent resistor in the project. I prepared a smart lamp monitoring system to monitor the health of street lamps and forward monitored result to the control station. I prepared the simplified block diagram of the complete smart lamp monitoring system. I used a light dependent resistor module, transmission module, and microcontroller module inside the lamp module. The lamp module would communicate with the control center through wireless using Xbee.

CE1.12 I designed solution prototype for the lecture hall where it was able to control both lighting and HVAC system. In addition, both systems were well integrated.On the surface of the illustrated lecture class room, there were four 15W incandescent lights where each light represented one zone of area in the lecture hall. On the zone one of the lecture hall area, there were three LED lights and one RFID reader. The three LED lights represented the signal light of computer, projector and OHP. Turn ON any lights of this would represent the signal of the current usage of the respective equipment.

CE1.14 I actively participated in the documentation of the project. I produced a mid-project progress report with emphasis on my literature review, preliminary findings from experiment and schedule of work planned in Gantt chart. I submitted the report to the school faculty and attained positive feedback for it. As a concluding step, I prepared a Power Point presentation in English to present all my work in a thesis seminar to other academic staffs and students. My thesis was also assessed by two academic staffs and received distinction grading.

CE1.15 I always ensured that there must be team coordination and avoidance of any sort of conflicts within the team. I always followed professional code of ethics and also ascertained that no environmental harm could be done by my work acts and project material. I always practiced code of academic and university ethics in my thesis project.

CE1.16 The project was very significant for my engineering course and it required comprehensive demonstration of managerial, technical, and professional skills in planning, executing and reporting on an approved engineering project within a stipulated time. I enhanced my project management expertise and sharpened my research skills. I learnt methods of data collection and synthesis of vital technical details from all resources to produce novel designs in the project. I also got an opportunity to be acquainted with the professional-standard technical documents. I improved my communication and coordination skills. It was a great opportunity and I would use these skills in my future projects.

Note : Your all career episodes will be in same format shown above for first episodes.

Please contact us to get your cdr report to be done with uniqueness.